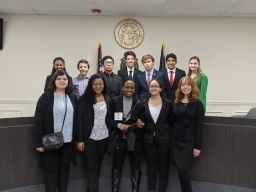 Deerfield-Windsor School began our Mock Trial program in the Fall of 2016. While we did not compete in our first year, partially due to the aftermath of the January 2017 storms, our program has grown and improved each year. Our first team to compete at the GA Bar Association's Region competition competed in January 2018 on the program's 20th anniversary in the state of Georgia. Since then, we have placed in our Region and moved on to the District level twice in the past three years.

At the competition, our student attorneys compete against other teams. Our defense team will compete against another team's prosecution team in the morning and our prosecution team will compete against another team's defense team later that day. Some of our students also use their theatrical skills to play the roles of the witnesses. They take the stand, swear to abide by the rules of the Mock Trial Competition, and answer counsel's direct and cross-examination questions. This is all done in a real courtroom with a presiding judge. Student attorneys and witnesses are then evaluated by real attorneys on the basis of their argument, courtroom demeanor, and presentation skills. There is no other extracurricular program that allows students to explore the realities of the law profession and gain transferable skills for a future career.

As the program has grown, we have also seen our students apply themselves in new ways. In August 2019 we sent our first students to the GA Bar Association's Law Academy, where they experienced a long weekend of intensified training in the law, led by attorneys and judges from across the state. Students even completed a student bar exam covering the rules of evidence that govern the Mock Trial Competition and courtroom procedure. We hope to have more students continue to pursue this opportunity and bring back valuable skills we can apply in the following season.

In addition, we have had students participate in the Craig Harding Memorial Court Artist Contest. These students sketch the Mock Trial proceedings live during the Region Competition and submit their sketches for SCAD professors to evaluate. Our court artists have twice won at the Region level.

However, none of this could be done without our teacher and attorney coaches. Anna Wilschetz (Upper School Humanities Teacher) helped to begin this program in 2016 and has worked to recruit new students each year and develop returning talent. In addition, our attorney coaches have been essential to the team's success. Charlie Peeler, Melissa Peeler, and John Moorhead have tirelessly donated their time and energy to supporting our students and giving them a greater understanding of the law. Without all of their contributions, none of this would be possible.